On a christmas walk, on the shiny new cycle track past the ornamental pond with its duckhouse and the ancient line of pinetrees screening the railway line. The new people, the off-comers, who have lived their whole lives in these quietly well-ordered streets, named after trees that never grew here - This is their world, but it used to be mine... and just once somebody asks

"You used to live here  before this housing estate was built? What was it like?" 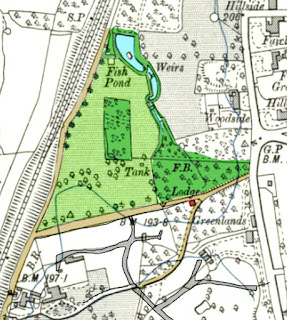 There was a footpath down to the field, it was always muddy. There was spring where a ghost of a monk used to come and fill a bucket of water, then disappear into a secret tunnel that led to the big house with the fancy wall. But no-one had ever actually seen it. There were two enormous conker trees either side of the entrance to the sloping field . In winter, you could sledge down it, and skim the strangely whirring ice across the pond to shatter on the bank. In summer the meadow flowers and grasses came nearly up to your waist. There were cowslips and shepherd's purse and lady's bedstraw and we looked up their names in the Observer book of wildflowers. There was a horse called Dolly lived in the field sometimes, and when she laid down she flattened the grass all round, you could lie down in the flat bits and hide and no-one would ever find you. In the middle was a wood, with holly trees - no good for climbing but you could slide down the clay banks hanging on to the branches, or hide. At the bottom was a willow tree which grew along the ground and then some branches went straight up. It was like a ship, and the long grass was wavy like the waves of the sea. You could stand in the prow like a pirate, shading your eyes against the sun and see for miles. Climb through the willow and walk all round the pond, balancing on the narrow bank between the water and the brambles. You could drag branches to try to make a bridge to the island. But it never really worked - someone always fell in the water and went home with one wet gray sock. It was Enid Blyton, it was Where the Wild Things were. It was the Phantom Tollbooth. That's what it was like.

The island had a dogrose, dark pink. It had the remains of half-successful bonfires, and tattered pages from a dirty magazine the Big Boys left behind. Next to the pond was a kind of swamp, full of tadpoles and bullrushes, stinky grey mud...and a  stream which ran down the side of the field through a wood; all bluebells, windflowers and primroses. Beyond the pond-edge brambles, and through the fence, lived another horse; pale and elegant with a stripe down its nose. And a brick path to the railway station, with two tiny, scary dogs that hurtled out of a farmyard, barking and jumping.
It was a place where we walked, and talked, and ran and shouted and dreamed and played. Picked flowers, stared at insects, laid in the sun and watched the lazy aeroplanes go over.  It was a place for kids, not for sunday afternoon granddads who preferred the climb to the water tower, via the railway bridge where we waved pointlessly at trains. Not for bicycling family picnics, or for healthy walks; but a place you rushed to, past the haunted house at the fork in the path, stomping through the mud past flowering bushes and huge nettles, hurtling down the grass slope with your brother, with your friends, on your own, hiding from the bad kids...  It was, for a few short years, my world. Before it was a Green Space, it was just a green space. That's what it was like.

And later, it was a racketty pathway, rutted with treeroots over which we rode our bikes, shrieking, downhill; hanging on to the freedom of childhood long after bras and Olevels got in the way. A place where we shared secrets and complaints and dreams of our future. We cried when they built on it, we had thought it was wild... but really we knew it was once an ornamental garden, with metal cages still round the maytrees and concrete stairs making a waterfall into the pond. The garden of the Big House on which, earlier, our own housing estate had been built. Kids probably played there with hobby horses or croquet, like in a Jane Austen novel, and dreamed of being explorers. Some family, who couldn't believe that anyone would one day forget that great grandfather planted that copse, ordered the modelling of that fishpond. Or that people would build houses, then more houses, then a third set of houses all over and fence off the pond so that it was overrun with hopping frogs every year, swarming the road, making traffic swerve and us squeal and jump to avoid them, never stopping to ask what became of all those tadpoles that we used to catch. Those posh children in pantaloons; before it was my world, it was theirs. And every child who played there, every Big Boy with his dirty books and every courting couple who walked the fields whittling or blowing dandelion clocks after a picnic with lashings of ginger beer and cliches... everyone has his own perfect remembered model of this small space, which expanded and contracted to fill the size of the dream and the length of the day. That's what it was like.
And now it's yours. So much smaller, but there are still rookeries that make the sound of summer and ice that whirrs on the pond. There are still tadpoles and mud and hedgerow flowers. And full of small things that ask for your attention. Lie down and watch the insects dance, inspect the leaves of the mosses and listen to the chattering of the squirrels in the quiet between trains. Make grass trumpets and collect acorns to plant.
Find your own ghosts.
Treasure them.
Posted by drfin at 11:45 pm