A good friend and sometime artistic collaborator has recently started working in "performance to camera" which is interestingly/ subtly not the same as acting or - well - performing. It is a way to share practice which is not simply a documentation, and engages the audience on an emotional level more than a documentary, perhaps because the artist has control of the process. Although maybe also a fruitful area for debate/ argument about auteurship and the locus of the "art" within the medium. I thought of this when I was doing the final sound mix for the soundtracks of the Shakespeares. I wrote the scripts, yes (based obviously on the ideas of Shakespeare, Hollinshed, and a number of scholars); but they were recorded as a kind of radio play, by members of "Out in the Garden" theatre group. It was live, and although the actors were not professionals they were very human and convincing . And it was apparent that there was a real interaction between the characters as well as the actors.
In very short animated shorts, the whole process tends to be a one-woman band. Ideas, Writing, Drawing, Animating... rather like the process of painting. This process did begin with a written story, but also with a strong sense of what the visuals would be and that the two would work together. Isn't that the only way? But working with a group of people in this way is refreshing. The group sessions had their own life, and that life came into the film, opened it out - letting mistakes or improvisations happen and then remodelling the film around the sound. Letting the particular way someone said a word, or phrased a thought feed back into the pace, and the detail of the images. Making sure that the things I had written actually made some kind of sense - or even some kind of poetry. So Im wondering about conceptualising this as a performance to microphone...which is then in conversation with the images, and they agree what they want to do and then get on with it.
The timings are different - the rhythms of natural speech are sometimes too fast/ sometimes too slow for the drawings...And the drawings have their own speed. Lumpier, more highly textured drawings wanting to move at a slower speed. Black and white drawings seemed to want a cleaner, crisper kind of sound - not technically crisp but stylistically. And then you have to try to match the kind of voice with not just the style of drawing but the shape of the character and how it moves. One of the voice cast asked me "How should a woodcut speak?"


Now that is a bloody good question all animators should be asking ourselves.

Finally  - actually quite quickly - finished the illustration for the book, although covers/ endpapers are still to be discussed tomorrow. Now that (see last post) was a good challenge and a good deal has been learned. It's useful to work in a different way sometimes, to have different constraints. They can be arbitrary (a film exactly 60 seconds long, a story without words or dialogue, a limited palette) but again, some artbitrary rules are more useful than others. When I was at artschool, systems painting was still going on - and paintings made to a decision process governed by chance (e.g. throw of a die). But I think agency is important. I make art, films, illustrations for trees, because I have something to communicate - a message, a sense, a celebration maybe even an inspiration. Without agency we cannot communicate. 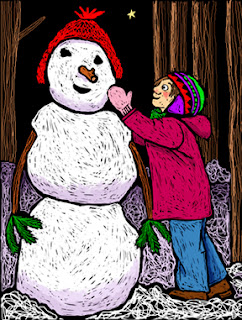 The tree (in the book) is female. The other main characters are also female - which can make for a confusion of pronouns - but is an important element of the story. We (the author and I) did not discuss gender stereotypes or why and in what possible sense could an artificial christmas tree be regarded as female...because we are old friends and it felt like we didn't have to. So the story can become one about empowering girls - not to do anything in particular, but just to be free of the pink-disney princess-or-maybe-its-OK-to-be-sporty stereotype. And to say not "a girl can do anything a boy can do" but yes, a girl can do anything a child can do, including dream. I tried not to give the girlchild a pink anorak, I did. But that was what she wanted to wear. Cerise pink, to clash with her red and purple hat. A character you can believe in has to have the space to make her own decisions in your narrative...which is why you need to push those arbitrary limitations - in your animation as in your life!
UPDATE: New improved girlchild, with more hair and generally looking less like Elmer Fudd. Avoiding gender stereotypes is quite tricky when you have so little detail to play with AND when faced with the audiences default assumption that people are male...
Posted by drfin at 2:09 pm No comments: