Because it was there... 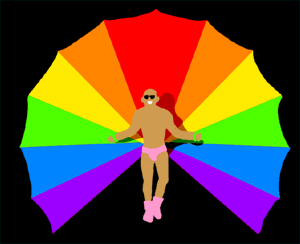 Once you are out of your artistic comfort zone, and no-one is crying, might as well try some other previously unused (by yourself) and hard-to-imagine-what-you-can-do-with-it technique. A tutor in my first year at artschool told me "you can change the story but you can't change the handwriting". We-e-ell Chris, actually you can if you work hard. If you decide to accept the challenge of doing a "simple clear instructional" animation style - just in case you really wanted to apply for some of those commissions - just to see you can - just because it was there. And quite quickly you realise you have to make the style your own, and it doesn't look much like the "inspiration/ source" materials that they have posted online because - well, that's someone else's work, ideas, style...handwriting. And because copying someone else's work is really boring.
(I mean, if that's what they want, why don't they find out who animated it and get them to do the commission? is that too simple? What about original ideas? What about being different because you are actually trying to compete with those sources so maybe an alternative approach rather than glorified plagiarism might be more exciting to your audience. Or maybe not. maybe your audience wants what everyone else has, in the same way everyone else has it? You see, I'd be rubbish at marketing...)
And then this interesting thing happens where if you take out all the autographic marks, the scribbly, gestural doodads, it becomes all about the colour. And you realise there is a very good reason why you normally work in black and white or limited colour palettes, because you're not very good at colour. I mean, I love colour! I love clashing red and purple clothes, rich mixtures of orange and red, I love the blue of bluebells and the contrast of purple and yellow in an iris. But without the marks, the textures, everything looks like it was cut out of sticky paper in a nursery classroom. And trying to use every crayon in the tin is fine when you are 7, but suddenly becomes painfully difficult and inappropriate when you are trying to be a mature artist. <Guffaw. Mature!>
Well then -  another day, another chance to learn something new, develop a new skill, face another challenge. Another chance to fail and a chance to be proud of succeeding. Another way to be a human.
Posted by drfin at 11:55 am No comments: 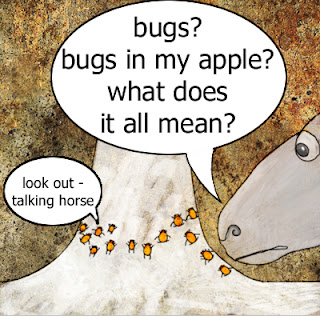