Animation as a social activity 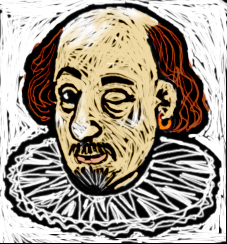 Part 4 of shakespearean woman - Lady Macbeth on the analyst's couch - has won a wee prize at the Shakespeare Film Festival, Yay! Hopefully I will be down in Stratford for the shortshorts night...And the Nice People at Out in the Garden have recorded another voicetrack for part 6 which is now complete. Whither next? Oh, well experiments in new "theme tunes" are being conducted with friend and colleague Mike Kirkup; new "Elizabethan style" music on guitar and harpsichord (did they HAVE harpsichords in Elizabethan times?)...and also some incidental music of the old cinema school; a possible model for many future shorts. And the NP@OITG are considering the possibility of devising new stories for short shorts collaboratively, improvising screenplays instead of plays. Suddenly animation has become a very social activity. ...which means it all takes longer. 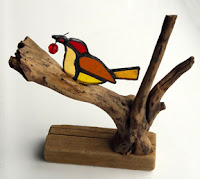 Meanwhile, I have been playing about with stained glass and driftwood, and making things. (possibly badgers) This has also involved walking on the beach. Is it art? is it craft? is it important? Well it's fun, and as I recall from the Sculpture School graffiti of the late 70s "Art can be Fun. Fun can be Art". And it provides achievable (with some language and personal injury) challenges. Plus getting feedback is nice. and making things can be a social activity.

After artschool, after various group studios and the PhD forum (Northumbria) and the late lamented School of Arts & Media (Teesside), there needs to be a new art community...but this is not always easy to find. Will they want me - am I cool enough (should I have a handbag made of an old Dulux tin? are my earrings making a statement?) Is this a scary clique who regard me as competition - or is that all in my head? How do I get beyond smalltalk and make meaningful connections? Exploring the spaces between disciplines, and the overlaps, remembering to look for creative energy everywhere...and Its just possible I have re-acquired a community of practice.
Posted by drfin at 7:05 pm No comments: 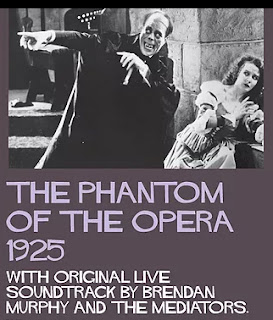 Last night I watched The Phantom of the Opera (Lon Chaney, not Lloyd Webber), which unaccountably I had previously never seen. The Tyne Theatre was a character in this drama - sitting in the posh seats you can really enjoy the baroque, blue swags, plaster fruit and veg everywhere, the extreme wallpaper, the sickening height of the ceiling and the beautifully lettered names of composers adorning the balconies. Reminding you it was - is - also an Opera House. The film was a restored print with ghostly green or purple/blue tinges, and some of the scenes were almost undecipherable. In fact there was so much colour in the Black-and-White it took a while to register than in the masked ball sequence it had suddenly gone into colour...a garish, red-heavy technicolour. But it was excellent, atmospheric, and in the "famous" unmasking scene, truly scary. Meaningful looks, heaving bosoms and general (by modern talkie standards) overacting notwithstanding.

Excellent, very much because of the live score provided by Brendan Murphy and the Mediators, using piano, electric keyboards and synths, glass harmonica and random percussion. Normally, I hate electronic music, but the subtle shifts from piano to organ to disturbing electronics were perfect, and provided a great counterbalance to the melodramatic elements of the visuals. I started out expecting - hoping - this would be a percussion version of the Buster Keaton-esque rinkydink live piano, huge and fast and mirroring the film. Instead it was subtle, beautiful, minimal in places and crazy - but never baroque - in others. It balanced the film and helped to reinterpret it for a contemporary audience. And a live soundtrack, with all the emotion and sense of presence and spontaneity...as though the band were expressing their response to the film as it occurred to them (which of course wasn't how it worked)...
An inspired idea by whoever programmed it into the Whitley Bay Film Festival.
And it made me think why it is that I hate the comedy soundtracks of animations - the mwah-mwah noises , the plinkety plink of feet winding up to run, the strange violin wa-ee-a telling you someone's jaw has just dropped in amazement. You don't need them. It's overstating. It's bolted on. And formulaic - a code - the opposite of live, spontaneous and expressive. If animations - like silent films - need to make their statements boldly and clearly, then that can be counterbalanced by a soundtrack which tells the story in a more abstract and lyrical way. As an animator I work with just the images; although there may be a script if there is dialogue; but the story, the emotion, the atmosphere has to come across without any sound...or how can I complete it? The sound IS an add-on, and yet it has to be as communicative, as creative, as crafted as the animation (or the silent movie) itself. And somehow it has to give an impression of an integrated, holistic end product...of an interplay between the two elements even though one is created after and in response to the other...a collaboration. I wish I could produce my own scores for the animation. Mostly, I wish I could afford to commission Brendan to do it.
Posted by drfin at 7:29 pm No comments:

Stress, tiredness, difficult things...can make you lose it. IT. Your Mojo. Your infallible creative wossname, that keeps flinging out ideas - some good, some hilariously unworkable, a few that are "meh" and every now and then, a really great idea. What do you do if you lose it??
Panic that it won't come back. Hope it's just stress. Remember what a friend told you 5 years after artschool - that if Picasso stopped painting for 6 months, it wouldn't stop him being a painter. and if you did something else for six months...
Fuelled by a half-formed idea about freelancing, making-stuff-to-sell and well, recreational art, I started making some glass things. Is it art? is it craft? is it therapy? Who cares. As an artist, it's sometimes just great to do something that doesn't have to be art, that doesn't have anything to prove...a birthday card, a thing to give as a moving in present, an infographic for a seminar on research informed teaching. Just to remind ourselves what joy is in drawing, painting, making...like we did when we were kids, watching Blue Peter and thinking "Ooh, Im going to make one of those...only maybe orange and with a funny hat on..." It's hard to do this as an adult; to use the same tools, and processes as you use for capital A Art, but without any expectation, without your inner tutor scoffing "decorative! derivative!". To do this - (and I quote from a long-ago degree show at Brighton, sketchbook entry of a sculpture graduate whose name I cannot now remember...) 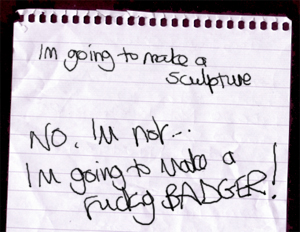 Because its fun. And importantly, because it gives your creative wossname a holiday. The work can be a kind of meditation...a kind of sympathetic magic where the feedback from your senses - the movement of your hands and the smell of the safety flux (!), the mess - makes the ideas come. Summons the mojo.

Next time I lose it, Im gonna make a badger.
Posted by drfin at 4:44 pm No comments: