After an insanely long time, "The Bathroom Cabinet of Doctor Calamari" is finally completed.  A collaboration with Paul (voice of the shed) Baldwin, this short animation is about- amongst other things - nostril hair, bathroom plumbing and existentialist dread. Visually realistic but simultaneously surreal, it started as a coffee conversation, and a title, related to a silly story about plughole monsters that Paul used to tell his kids. This was a lively process of co-writing, and real collaboration (necessitating strict storyboarding). Paul composed and edited all the soundtrack; the limited voice-overs we needed were complicated by the fact that one had to be a child (and our fist choice child's voice broke before we had finished!) Great fun and the conversations generated many images and comic ideas...but ultimately a bit cumbersome and slow...I prefer working on my own and then letting someone add their music/interpretation afterwards! 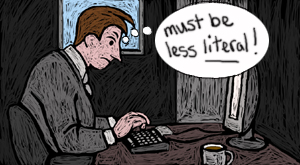