Having undertaken to illustrate a children's picture story (that's a separate category from picture book, who knew?), I thought it would be so much easier to make a simple series of 30 images instead of 1500 per minute. How much more time I would be able to spend on each, making it perfect. How intricate and endlessly fascinating each image could be, like the best of those I remembered from childhood. Those which allowed you not only to enter the image, but wander around examining flowers, delicate grasses and textures...and imagine the backstory; look deeper and invent more stories. The liberating ability to include random extras, red herrings and decorative details.
Hahahahahahahahahahaha.
In fact, I have wildly underestimated the demands of a different discipline; I am struggling not to assume that each illustration must be exactly the same size and shape, filling the "screen" , even though some of them are detailed close-ups and some distant views. The shift from landscape to portrait orientation is easier so far - possibly because coming from painting into animation I found the transition from portrait to landscape was quite hard in the first place. 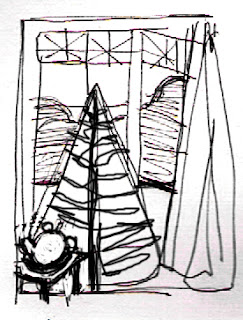 I failed to anticipate the scariness of trying to draw something well enough to withstand that lengthy scrutiny instead of hurtling past at 25 images per second. Weirdly, this means I am sketching on paper and scanning the sketch in a desperate attempt to get the process going...Not only all of this, but more importantly I have also underestimated the power of persistence of vision. Every image I see in my mind is a "scene" - an animation, and I can't read "the tree was about as tall as a person" without seeing the tree grow upwards, a person peer around the branches and then wave at the reader. Trying to build that sense of movement, of energy...trying to develop the dramatic pace that will match that of the original story...without using animation? Will I be able to complete this project without having accidentally created the e-version, the flickbook, and the interactive animated ebook first??
Watch this space.
Posted by drfin at 12:58 pm No comments: